Bringing Birdsong to the Valley

The ruru (morepork) is a predator – but it’s certainly not on the ‘predator-free’ hit list. Those slots are just for introduced mammal predators which haven’t co-evolved with our vulnerable native species. Ruru do prey on other native wildlife however, including endangered species, as a recent study carried out on Tiritiri Matangi Island reveals.

Sarah Busbridge (University of Waikato) and John Stewart (Supporters of Tiritiri Matangi) carried out an observational study on the diet and breeding success of morepork (ruru; Ninox novaeseelandiae) using video capture methods during the 2016-2017 breeding season on Tiritiri Matangi Island and the results are published in Notornis, the journal of Birds NZ (New Zealand Ornithological Society).

“The study investigated diet composition, frequency of prey deliveries, timing and frequency of chick provisioning, the behaviour of morepork and their young at 10 nest sites and considered the possibility that morepork predation was having a negative impact on species of conservation importance. The objective of this study was to obtain more knowledge of the dietary composition and breeding success of the resident morepork population on the Island. We were particularly interested in the quantity of vertebrate prey that was being taken by morepork on Tiritiri Matangi Island with the hope of determining whether morepork are acting as a limiting factor for endemic bird populations, in particular stitchbird (hihi).”

“The cause of this juvenile mortality is not well understood. It has been noted that morepork have the potential to increase the risk of mortality in local bird populations and a previous examination of nest contents on the Island found individually marked leg-bands originating from at least five stitchbirds, four of which were juveniles. There have been relatively few comprehensive scientific studies of morepork diet on offshore islands, and the effect they may have on small populations of endemic bird species has not been thoroughly investigated. Such research will lead to better understanding of the relative importance of native predators among all the factors that impact on these species.”

The morepork (ruru) is a forest-dwelling owl native to New Zealand. It’s relatively common in and found throughout areas of native forest, as well as within modified habitats such as farmland, pine plantations, and peri-urban green space.

“They are a small owl, approximately 29 cm long, weighing 175 g and have an average life span of approximately 6 years. During the day they roost amongst the foliage of trees and epiphytes, and occasionally in crevices, on ledges, or in burrows. After dusk, they leave their roosts to hunt. They are territorial and have been found to defend a territory of 3.5 to 7.8 ha.”

Morepork are monogamous and their breeding season runs from September to January.

“The season begins with pairs roosting together, before moving to a nest, with egg laying beginning in October. Nests are usually within cavities of dead or live trees but have also been found in burrows or scrapes on the ground, in thick clusters of epiphytes, in caves, tree forks, and in nest boxes. Nest sites are often reused and once found can be checked annually. Clutch size consists of 1–3 eggs, with a typical clutch size of 2.”

Eggs don’t all hatch at the same time, so chicks are slightly different ages and sizes. They reach independence at approximately 91 days, fledging at approximately 35 days in December to January. Prior to fledging, both adults feed them.

“Once nest sites had been located, four Bushnell HD NatureView cameras (model: 119440) were used to observe the morepork nests. Morepork activity was detected by a passive infra-red (PIR) motion sensor, at which time the camera was set to record a 15-second video. No-glow ‘black’ IR LEDs provided sufficient illumination for the camera to deliver black and white video in the dark. The following camera settings were used to capture videos: video size was 1920 x 1080 pixels, sensor level was high, LED control was low, night-time only capture, sound capture was on.”

“For each nest site, nest characteristics were recorded, and at least once a week nests were checked and further observational data collected and recorded on nest record cards. Approximate dates of hatching and chick fledging were estimated where possible if exact dates were not known. At the end of the season in January, breeding success was measured as the number of chicks fledged per breeding pair. Diet was studied using direct field observations, footage from the motion detecting cameras, nest sampling, and analysis of regurgitated pellets consisting of indigestible material consumed by moreporks. A combination of these techniques has been proposed as the best method for determining owl diet during the breeding season.”

Morepork are opportunistic predators so diet probably varies according to habitat, vegetation and seasonal abundance.

“Macro-invertebrate species including wētā , beetles, cicadas, moths, stick insects, and spiders are the core component of morepork diet. They are also known to hunt for larger vertebrate prey including birds, lizards, and small mammals such as mice, kiore, and ship rats if present.”

Tiritiri Matangi’s ruru were found to consume large numbers of tree weta. But hihi (stitchbirds) were also on the menu.

“Tree wētā (Hemideina spp.) were found to be the most common prey type consumed at nest sites. Evidence of predation of bird species of conservation importance including stitchbird (hihi) was also found. Prey species continue to exhibit positive population growth rates, indicating predation rates are too low to have a significant destabilizing effect. However, as the population of moreporks has also grown, it is recommended that their impact on prey species be monitored.”

“There may have been a further five, but the prey items were not clearly identifiable as birds or videos did not show footage of an arrival. Without observing the initial delivery of the item to the nest, we cannot be confident the footage is not of a previously cached prey item being consumed or fed to chicks, so these observations were excluded.”

The researchers encountered a few technical challenges during their study.

“We experienced occasional technical difficulties with cameras running out of battery, video files corrupting, and at times not having cameras correctly positioned to capture activity at the nest. Furthermore, not all nest sites were monitored with cameras. Pellet collection was largely unsuccessful with only 2.5 pellets collected beneath roost sites during the extent of the study.”

Some individual morepork were greater predators of birds than others.

“All of the nest sites excavated contained bird remains, although some sites had a much higher proportion of bird remains than others. Feathers were assumed to be evidence of predation as morepork are not known to add material to their nests.”

“We observed three incidences of predation on lizards; however, again the species were not able to be confidently identified from the video footage. Based on the size of the lizards it is likely that one was a gecko and the other two were skinks. No identifiable lizard remains were found at nest sites or roost sites. While lizards do not seem to be a common prey item for morepork, it is evident opportunistic predation does occur and may be more common when lizard abundances are high.”

So what are the implications of the study, where morepork share island habitats with more endangered species?

“Offshore Islands such as Tiritiri Matangi may have higher avian and reptile predation rates than mainland New Zealand due to the increased availability of these prey types in the absence of mammalian predators. As a pest free island, Tiritiri Matangi is home to many small populations of endemic species of conservation importance, as well as establishing translocated populations. Exact numbers of morepork on Tiritiri Matangi are unknown; however, using observational data from 2016-2017, we can estimate that there are around 20 breeding pairs. Our results indicate morepork diet on the Island consists predominantly of tree wētā and other common invertebrates. However, we have also found evidence of predation upon indigenous bird species.”

Such predation is, however, normal for the native species concerned, in that they have co-evolved with morepork as predators.

“Natural predators such as morepork are an integral part of native ecosystems and are unlikely to have a significant destabilizing effect on established prey populations. Nevertheless, morepork densities and their potential impacts on other species should continue to be monitored. It has been proposed that translocated populations, especially captive-bred individuals, may be particularly at risk of predation due to unfamiliar habitat and/or loss of anti-predator responses.”

“Our results suggest that, with their varied and mostly insectivorous diet, morepork are unlikely to pose a major threat to uncommon avian prey populations. However, if populations have been recently translocated, are already perilously small, or potentially rendered further vulnerable by disease, competition, reduced genetic diversity or nutritional deficiencies; morepork densities and the risk of predation should be taken into account.”

“Further research is needed to provide a more accurate estimate of morepork population density, investigate survival of fledglings, quantify the impact of predation on conservation species and further investigate whether morepork are limiting juvenile recruitment of stitchbird on Tiritiri Matangi Island.”

The full report is published in Notornis and is freely available online. 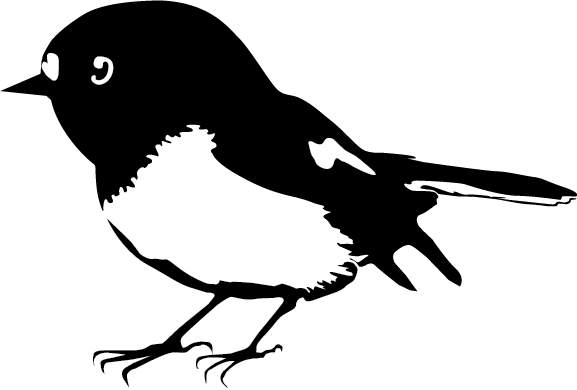